I decided to stay at Kabul Hostel, this was considered a “party hostel” as they described it on the website. I was in a 22 bed dorm room! It actually wasn’t that bad at all, very large room and curtains that went around my bed to make it feel like my own little room. After checking in around 1:30am (a few hour time diff) so I wasn’t that tired and I wasn’t ready to go to sleep. Luckily the city was far from sleeping, the hostel was located in the middle of this square surrounded by restaurants. Right next door had a dance club, so I decided to check it out. Despite being the most sober person there I had a good time checking out “the scene.” I few $5 beers later I decided to hit the sac. The next couple days were rainy so I didn’t do much- which was actually perfect bc I was getting pretty tired from driving, hiking, walking, constantly moving from one place to another. The Hostel offered dinner, had a cool hangout area with pool tables and TVs, and a rooftop bar that offered great views when not raining. The 2nd night I was there was a Barcelona game and the bar offered free beers every time Barcelona scored! Score! I stayed for dinner and 1/2 the game then went to another bar to watch the 2nd half. The next night (still rainy) I met a few guys at dinner that offered to go to a cool cafe, why not. Only this was not your normal cafe. This was a “invitation only” cafe where you could buy and use marijuana legally. What? I thought it was illegal in most of Europe but I guess they have a few cafes that allow it (only they can’t have signage or advertise, and you have to be invited by a member)(luckily the guys went there before from another friend and were members). So we had a few beers, a few joints and made our way home (pouring cats and dogs). We had no choice but to get wet, luckily we were in the right “mood” to not give a F#$%. My shoes didn’t dry till 3 days later, and I was forced to wear sandals the rest of the trip (OK until I tried to go to a club-the laughed at my sandals but still let me in). Finally I was rewarded with sunshine, I was able to check out some of the sites I had read about. La Familia Secrada was by far the coolest architecture feats I’ve ever seen.  This is a church that started construction in the 1896 and isn’t scheduled for completion until 2026, it was designed by Goudi ( I wonder if the work gaudy comes from this architect?). The walls were glowing red, orange, tree, and blue from the stained glass large windows while the pillars where curved and huge. What a sight. 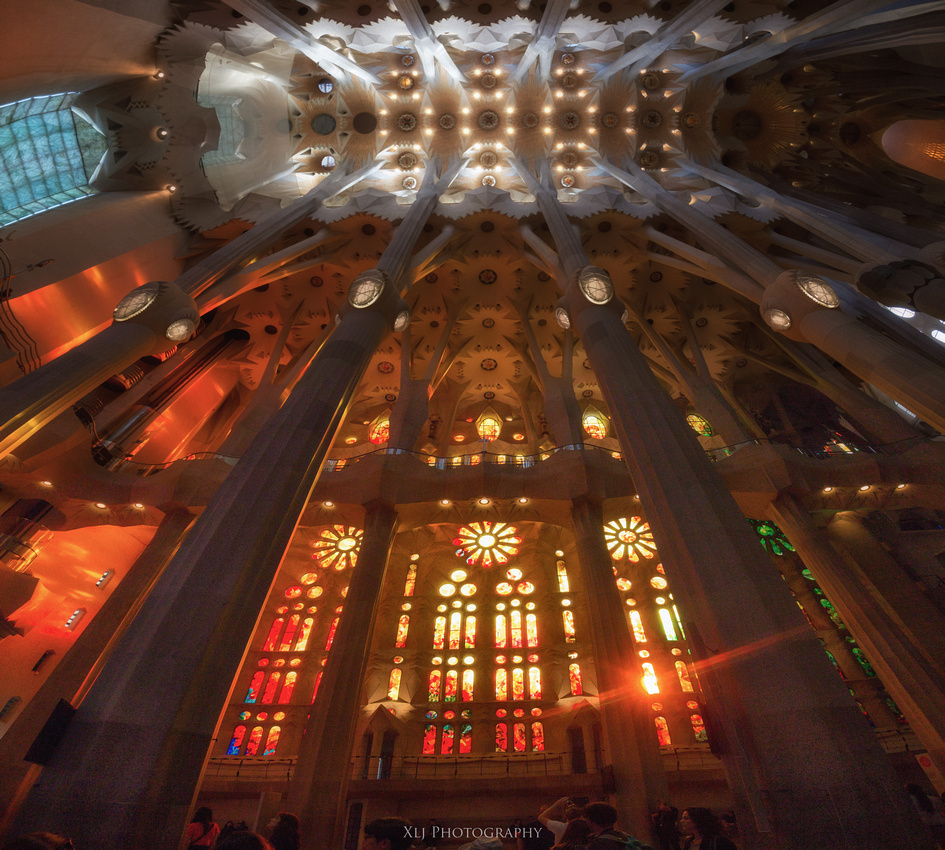 On the last day I woke up to cleaners in my room, they said it was almost 12, my train was at 11, checkout at 10, and alarm set for 9am. WTF. I lost my phone. After searching my room I verified i did not have my phone, what could have happened, there's no way I didn’t have it coming home as I use it for directions, my only thought was that someone from my room stole it. I dunno. I even googled device manager it and it showed last seen in my hostel but when I clicked ring for 5 minutes nothing rang. So I need to get to the train station and see if they can refund or change my ticket, where's the train station, fml, I dunno I don’t have my phone. After staring at many maps and pulling about 1/3 of my hair out, I determined what station I needed to be at. Bought a metro ticket, realized I was on wrong side of metro (going wrong direction) had to buy another ticket to get to other side, I realized I left my cc in the machine after I went through ticketing, so I went back and of course had to buy another ticket. 2 metros and 3 tickets later I arrived at Sant station where my original train was scheduled to leave from. 3 counters later I found the train customer service station, they said bc it was past 30 minutes that I had to buy I whole new ticket (tickets were 100 euro), I pleaded with them as i was a victim of theft (maybe), and no mercy.  So I bought another ticket (111 this time) and the next one was at 4pm (it 1pm now). SO long story short, I have no phone (which has everything that I could possibly need). SO I’m headed to Madrid with no phone. I can’t even fly my drone without my phone, I need it for maps, booking hostels, alarm clock, etc etc. Today's the day I check in with my parents and its not gonna be via phone… I hope to find wifi soon and message them. The question is, do I buy another phone capable with google project fii (only select phones) or have my dad ship an old phone I have there and work off sim cards? i dunno damn. How could this happen to me, I’m so confused, theres no way I didn’t have my phone when I went to bed, I even remember setting the alarm, how did they get it, where did I leave it?? Luckily I’ve booked most my flights and hostels for the next few weeks and I still have my laptop which can retrieve all my boarding passes and confirmations.

The first few days in Madrid I felt lost, sad, helpless, and a lil down. My main means of communicating with some of my friends was via text/instagram/snapchat all of which I had no access to. This really made it hard initially. I was expecting Madrid to be a little more boring of a city but to my surprise it was not. Very lively as as well, it seemed like it was a little larger than Barcelona and not as walking friendly, although not bad. Metro was pretty easy to use and could get you almost anywhere you needed. A ton of Tapas restaurants. So it seems the Tapas are split into a few categories, your Empanadas (meat/veggie filled pastry), Montaditos (bread topped with fish/meat/chz/etc), Croquettes (ham /veggie cream filled small balls?).  There was one place I went called 100 Montaditos (it offered 100 diff choices of these ranging 1-2$), kinda tough to order bc theres no translations (and no phone to translate for me), but being so cheap I just had to get a few and hope for the best. Most of them were very tasty. All of Spain seems to be big in Jamon (ham), only not the ham we are used to in the states. Big ham legs (4ft) dried and aged then finely sliced and served on bread or by itself. They had these jamon shops everywhere.

The bad- large city-can’t walk everywhere need to use metro,

Side note- after loosing my phone there were a few things I realized/felt.

Its really hard to navigate without google maps

There were so many pictures that I missed by not having my phone and not lugging my big camera around.

There really was no way of communicating with certain people and that made me sad.

I’m in the final week in Europe. I will spend it in Berlin, Germany and Prague, Czech Republic. My next leg will be to Bangkok, then north to Chiang Mai for the Yi Peng festival (the festival of lights) for some amazing photography opportunities. I will then spend the next couple months exploring thailand, cambodia, vietnam, etc etc.

Check out my Europe photos here!