Ok I have a phone, no service yet but moving in the right direction.

Of course google maps won't allow offline maps for Thailand (licensing BS) so new tip maps.me does same thing but works in Thailand. I of course booked my flight from prague with a 5 hr flight to Dubai, 8 hr layover in Dubai, 6 hr flight to Bangkok with a 6 hr time change. Left 11/30 11:30pm arrived 12/1 2:30am; talk about a long day. After learning many lessons I arrived after doing research on the metro. I'm confident I can do it with no issues this time. Arrive at airport and metro is closed! Aargh of course it would be. Taxi it is and luckily the hostel put a number for taxi to call for directions. Easy peasy. They have traffic lights with count down timers on them?! Genius, how many accidents would that avoid? Due to my poor planning (an honestly confusion of when I was actually arriving) I was only in Bangkok for less than 4 hours (nap time) then back to airport to Chiang Mai. Missed that flight due to maps.me and their horrible driving estimation (say 20 min- ended up being 45 min). Note maps.me app is great for walking and driving directions but not at estimating how long it will take. Double check on google maps if you have internet for the accurate time!

The time change and the travel had me in and out of naps for the next 2 days. I managed to get out one night to Loi Kroh street, a famous street in Chiang Mai where the nightlife is. I found it very interesting that it cost extra to buy a drink for ladies. My guess is that a group of "lady workers" (prostitutes) work with a specific bar and help to bring in traffic amongst other things. Then at the bar they say, aren't you gonna buy her a drink, I say sure. Hand her double the cost and she say "it cost more" and points to a disclaimer at the bottom of the menu saying "drinks for ladies is 50 baht extra" ($1.50). I guess I was naive and didn't realize that the girl I was playing pool with was after more than my 8 ball, lol. After the game I left (sorry no extra fun), but I did get hit up by at least 4 other ladies on the way back. Man it was a zoo there; girls grabbing you, stopping you, cat calling. Is this was girls have to go through on the regular??

So the next day was the start of the Loi Krathong festival which also hosted the Yi Peng festival. It is celebrated on the 12 lunar month on the full moon each year. Loi Krathong means to float basket in the river for the river spirits. Yi Peng is where you launch sky lanterns into the sky, also for good fortune. This was what I came to see. Our hostel was coordinating an event so that they would provide you with a candle float, sky lantern and taxi service to and from the event. That was nice since traffic was a nightmare and I wasn't sure really where to go to watch it. I met some really cool people there as everyone was very nice. What an occasion it was! There must have been what seemed to be millions of lanterns in the sky and with the full moon behind them.....WOW. A must see!

The next day I was recommended to go to this elephant sanctuary that was nearby. So I went not knowing really what to expect and ended up having a blast! They people who hosted it spoke very broken english were very funny. We got to feed them, give them mud baths, then play in the river with them. They are surprisingly very gentle and each had their own character. 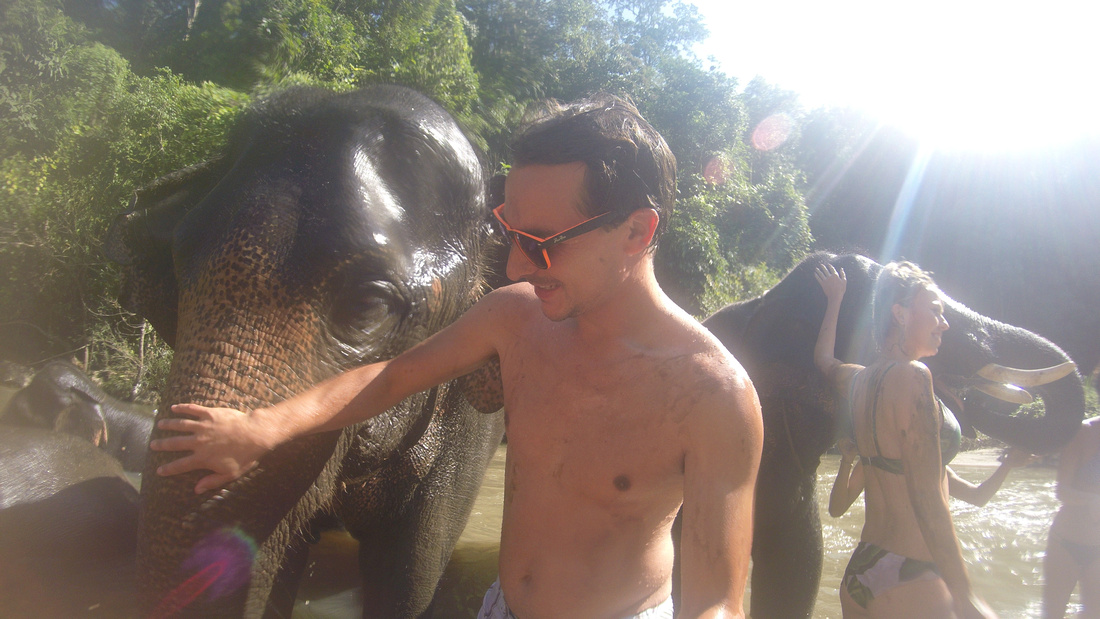 So what now. I have left this part of my journey pretty open as I wanted the universe to guide me in the direction that was best. So I started looking online of things to do and see in Thailand and surrounding areas. There were some cool temples in Chiang Rai (about 3hrs north) and some cool yoga retreats in Pai (also 3 hrs north in the mountains). I was told about Pai before from a traveler and he said I had to see it. I also came across quite a few posts on riding motorbikes down Vietnam and everyone seemed to think it was the most amazing experience of their lives. This seemed like something I would enjoy, a little adventure, a little danger (Vietnam is the #1 most dangerous place to drive in the world) (sorry mom) (coming in second is Thailand), and some views/pictures that wouldn't be the typical Phuket Island postcard overdone pictures. So my mind was made, buy a bike, check out Chiang Rai, check out Rai, maybe do a yoga retreat in Pai, head to Vietnam and go south, go to Bangkok and explore there, sell bike, and fly to Japan. My timeline was roughly 8 weeks.

Well I managed to find a bike pretty easy (craigslist) from the nice old American guy that was living out here that just couldn't safely ride anymore. We chatted for a while (you could tell he was a little lonely) and I managed to talk him down to a more than fair price. So I am now a proud owner of a 125cc Suzuki motorbike with 20k km on it! I picked up for $450 which I hope to sell for the same. Funny in Hawaii I bought a 50cc bike for $500. This thing was waaay faster and definitely suitable for highways and mountain roads.

I found a pretty cool yoga retreat called Xhale Yoga that decided to book with in Pai. It is a 5 night 6 day retreat, where my days will consist on Hatha yoga, Yin yoga, 3 vegetarian meals, cooking class, Pranayama (breathing exercises) and Meditation, hot springs, Yoga Philosophy, and Chanting (mindful meditation). Mind you I do not currently do yoga but am very interesting in how it connects the mind and body whereas meditation is more mind.

Just me, a motorbike and my camera. This is gonna be wild. And right after my retreat. I'm very excited and pretty nervous too.

Currently there is massive flooding in much Vietnam due to a Typhoon that hit them. I'm still 2 weeks before I plan on going but things may end up changing once again.

Well I'm off to Pai! Will check back after the retreat and after I decide the next steps whether that be the original plan in Vietnam or something entirely different due to weather conditions. Laéw-jer-gan!

Check out my Thailand photos here!